Jehovah is Not in the New Testament
7 Min Read Time

The word Jehovah never appears in the New Testament. This will come as a surprise to most Jehovah’s Witnesses, as Watchtower’s New World Translation of the Holy Scriptures includes the word Jehovah 237 times.

The Tetragrammaton (YHWH), commonly translated as Yahweh or Jehovah, appears around 7,000 times in the Old Testament, but never in the New Testament. Over 5,000 Greek New Testament manuscripts have been discovered, yet “Jehovah” does not appear in a single one of these.

The inclusion of Jehovah in the New Testament of the New World Translation changes the meaning of key Scriptures, and raises serious issues for Jehovah’s Witnesses. If Watchtower is correct, and “Jehovah” was originally in the New Testament, but later removed without trace, the integrity of the entire Bible is undermined. If such a significant word has been removed, what else in current Bible translations is wrong? 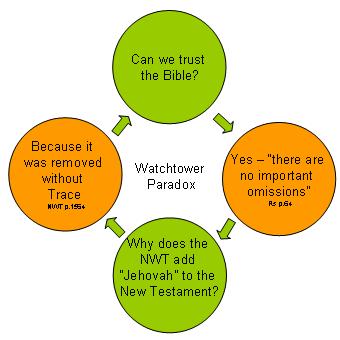 Watchtower admits the Name wasn’t there

“The position of God’s name is unshakeable in the Hebrew Scriptures… With the Christian Greek Scriptures, the “New Testament”, the situation is different… no ancient Greek manuscript that we possess today of the books of Matthew to Revelation contains God’s name in full.” The Divine Name that will Endure Forever p.23

On the other hand, when attempting to build faith in the Bible, Watchtower asserts the New Testament is uncorrupted and without omissions.

“Bible copyists, of course, made mistakes. But none of those mistakes corrupted the Bible. … So, has the Bible been corrupted. Emphatically, no!” Watchtower 2017 no.6 p.14

“No striking or fundamental variation is shown either in the Old or the New Testament. There are no important omissions or additions of passages, and no variations which affect vital facts or doctrines.” Reasoning from the Scriptures p.64

This is stunning dishonesty, considering Watchtower teaches the most important word, God’s name, has disappeared without a trace.

Evidence it did not Appear

Even the oldest discovered Greek New Testament manuscripts do not contain the tetragrammaton.

Watchtower alleges the Jehovah was removed from the New Testament during the second century.

“When apostate Christians made copies of the Christian Greek Scriptures, they evidently took Jehovah’s personal name out of the text and substituted Ky′ri·os, the Greek word for “Lord.”” Watchtower 2010 Jul 1 pp.6-7

“Sometime during the second or third century C.E. the scribes removed the Tetragrammaton …” New World Translation of the Holy Scriptures – With References p.1564

There is no proof to support this claim, since no ancient New Testament document has been found with YHWH in it, nor any discussion or debate in other manuscripts regarding the removal.

“Jehovah” is not contained in the writings of the early Christians, referred to as the Apostolic or Ante-Nicene Fathers, who wrote from the times of the Apostles to the third century. Even when quoting YHWH from New Testament Scriptures, “Jehovah” is not used. When contemporary writers quoted from the Scriptures, they did not find the name ‘Jehovah’. For example, Justin Martyr converted to Christianity around 150 A.D. In The Second Apology, Chapter VI he wrote;

“But to the Father of all, who is unbegotten, there is no name given. … these words, Father, and God, and Creator, and Lord, and Master, are not names, but appellations derived from His good deeds and functions.”

Watchtower uses four lines of reasoning to justify including Jehovah in the New Testament, none of which constitute proof.

From 1385 A.D. onwards, the New Testament Greek manuscripts started to be translated into certain Hebrew versions with the inclusion of YHWH. When inserting Jehovah in the New World Translation, Watchtower translators reference the J Versions as justification.

It is essential to understand that these have no connection whatsoever with the Hebrew Scriptures or Old Testament manuscripts. J7 was translated from the King James Greek text in 1599 by Elias Hutter. J18 is from 1885 and printed by The Trinitarian Bible Society in London.

Watchtower does not consistently follow the J Versions, since the J Versions were by Trinitarians, and included YHWH to support that Jesus is Jehovah. In over 50 instances, New World Translation does not include Jehovah where the J Versions have. For instance J7 and J8 translate 1 Peter 3:15 as:

In this case the NWT rejects the J Version’s use of the word Jehovah, rather reading;

(NWT) “But sanctify the Christ as Lord in your hearts, …”

Watchtower claims it rightfully replaces the Greek words Kyrios and Theos with Jehovah whenever the New Testament quotes Old Testament that contain Jehovah..

“The modern translator is warranted in using the divine name as an equivalent of (“kurios”) and (“theos”) , that is, at places where the writers of the Christian Greek Scriptures quote verses, passages, and expressions from the Hebrew Scriptures or from the LXX (Greek Septuagint) where the divine name occurs.” 1985 Kingdom Interlinear Translation p.11

Since New Testament manuscripts do not contain Jehovah in these places, this is unsupported speculation.

Jehovah’s Witnesses are led to the conclusion that every inclusion of Jehovah in the New Testament has support from an Old Testament quote. Yet;

In 1977, George Howard theorized Christian writers may have used YHWH in the original manuscripts of the New Testament. Watchtower promotes his theory as fact. 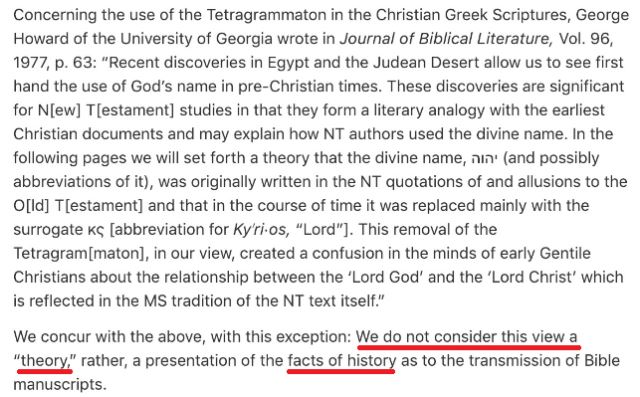 Howard is not supportive of this misuse of his research, explaining in a personal letter, dated July 3, 1997, “Although they [Jehovah’s Witnesses] quote me in support of their theory, my research does not support them, nor do I support them. Finally, my articles report only on a theory of mine that is not yet proven.” 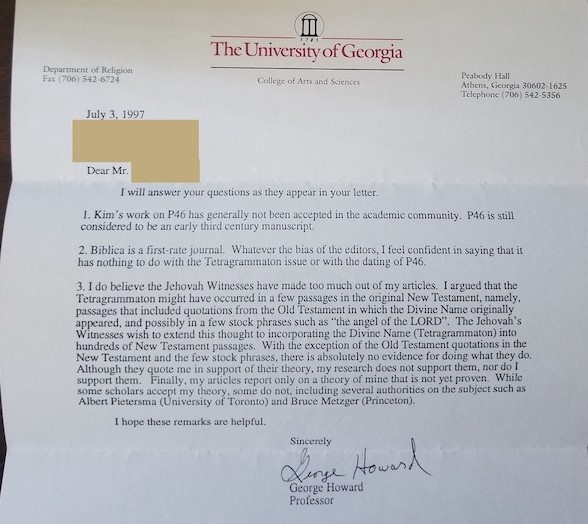 There is a tradition that Matthew wrote his gospel first in Hebrew and then rewrote it in Greek, though this is open to debate. The earliest manuscript we have of a Hebrew Matthew is from the 1380’s. It is unknown who wrote the original Hebrew version this is based on, and YHWH does not appear in it, but rather it contains the term “The Name.”

“… Shem-Tob’s text of Matthew includes “the Name” where there is good reason to believe that Matthew actually used the Tetragrammaton.” Watchtower 1997 Aug 15 p.30

Effect of adding to the Bible

Adding Jehovah to the New Testament is a serious misrepresentation of Scripture that changes the meaning of key passages.

Watchtower publications quote Romans 10:13 to show use of the word Jehovah is a requirement for salvation.

“We stand now at the brink of the greatest tribulation of all, when Jehovah’s storm wind will sweep wickedness from the face of this earth, clearing the way for a paradise of eternal peace. Will you be one who “calls on the name of Jehovah” in faithfulness? If so, rejoice! You have God’s own promise that you will be saved.-Romans 10:13.” Watchtower 1997 Dec 15 p.21

Examination of the Emphatic Diaglott, published by Watchtower shows that the word used in this passage is not YHWH but Kyrios (κύριος) – Lord.

As Romans 10 states at verse 9 that “Jesus is Lord (Kurios)” it follows verse 13 also refers to Jesus, identifying Jesus as the requirement for salvation. Falsely inserting Jehovah into the New Testament manipulates Jehovah’s Witnesses to believe they are the only ones that will be saved. 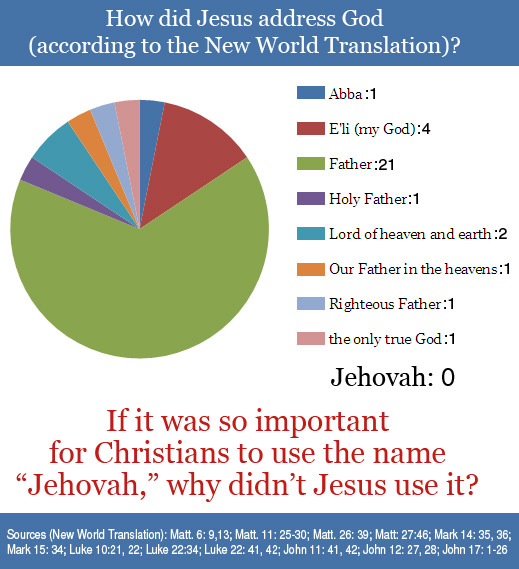 Watchtower presents the following paradox; Jehovah has not been found in the New Testament because it has been tampered with, but the Bible is inspired and accurately preserved by Jehovah.

As Jehovah was not used in the New Testament, the use of the word Jehovah is not a necessary requirement for salvation. Watchtower has acted dishonestly including Jehovah in the New World Translation, wrongfully distorting Jehovah’s Witnesses understanding of the Bible.