One of the most misleading statements in Watchtower publications is the claim they foretold 1914 as the beginning of the Last Days. They use this prediction to claim Jehovah’s backing.

The following quotes shows Watchtower made entirely different predictions for 1914 and when proven wrong lied to cover these up.

Watchtower quotes prior to 1914

Under its founder, Pastor Russell, Watchtower presented the following chronology, with 1914 to be the end.

Predictions prior to 1914 were very specific and also included:

Not one of these predictions occurred.

After 1914, Watchtower reprinted the Studies in the Scriptures series with amendments. For Example, Thy Kingdom Come on p.228 changed the words “some time before 1914” to “soon after 1914”.

We call attention to a few slight changes which have been made in four pages of Vol. II. and six pages of Vol. III., “STUDIES IN THE SCRIPTURES.” These are all trivial and do not alter the real sense and lesson, but conform to the facts as we have them today. The pages containing these corrections are as follows:

*How long it will require to accomplish this overturning we are not informed, but have reason to believe the period will be short.

+The end of the harvest will probably include the burning of the tares. 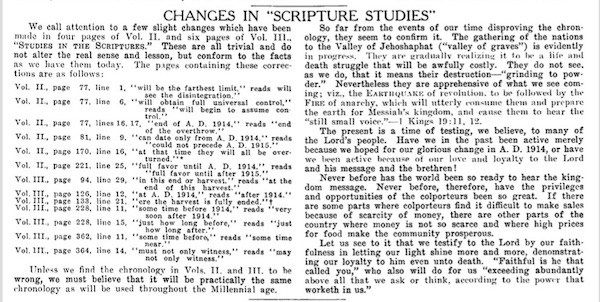 Watchtower’s Dishonest Presentation of its’ History

Following 1914, Watchtower began to lie about the way 1914 had been viewed. The following quotes demonstrate the lies spanned decades.

“At the kingdom’s birth in 1914, the Bible Students were not exactly sure what was going to happen, but they knew it would be a pivotal year.”

This is untrue. Watchtower dogma presented exactly what was going to occur in 1914.

“In view of this strong Bible evidence concerning the Times of the Gentiles, we consider it an established truth that the final end of the kingdoms of this world, and the full establishment of the Kingdom of God, will be accomplished by the end of A.D. 1914.” The Time is at Hand 1911 ed. p.99

“… on Friday morning, October 2. Everyone was seated when Brother Russell entered. “We were highly excited and I would not have been surprised if at that moment we had just started up, that becoming the signal to begin ascending heavenward—but of course there was nothing like that, really.”” Yearbook 1975 pp.72,73

Expectations for 1914 were forcefully presented as fact and ‘established truth’ as shown in the following quotes.

After proven wrong about 1914, Watchtower said its teachings had only been inferred.

Instead of humbly accepting the blame, Watchtower attacked the motives of followers that left.

“Have we in the past been active merely because we hoped for our glorious change in A.D. 1914, or have we been active because of our love and loyalty to the Lord and his message and the brethren!” Watch Tower 1915 Mar 1 p.79

“If there is any reason that would lead any to let go of the Lord and His Truth and to cease sacrificing for the Lord’s Cause, then it is not merely the love of God in the heart which has prompted interest in the Lord, but something else; probably a hoping that the time was short; the consecration was only for a certain time. If so, now is a good time to let go.” Watch Tower 1914 Nov 1 p.331

What shameless arrogance. Those that stopped following Russell’s teachings did so because they came to realise he was a charlatan promoting lies.

Watchtower has continued these personal attacks on members over the decades.

“Some read into the Watch Tower statements that were never intended, and while it was necessary for Russell to call attention to the certainty that a great change was due at the end of the Gentile times, he still encouraged his readers to keep an open mind, especially as regards the time element.” Jehovah’s Witnesses in the Divine Purpose p.52

“Had some been attracted by the thought of their own early salvation rather than love for God and a strong desire to do his will?” Jehovah’s Witnesses – Proclaimers of God’s Kingdom p.62

Watchtower was not guided by Jehovah. Russell took his interpretation of the Gentile Times from Second Adventists and was spectacularly shown to be wrong. Watchtower gloats over its remarkable foresight that the “Gentile Times” would end in 1914, yet the term Gentile Times never appears in the Bible, and the concept is vague and unverifiable. On the other hand, every single verifiable prediction Watchtower claimed for 1914, such as the end of religion and government and the earthly resurrection were all proven false.

Early Watchtower followers were convinced the end would be in 1914, just as Jehovah’s Witnesses are convinced Armageddon will arrive at any moment. This is because the same manipulative indoctrination techniques used prior to 1914 continue to be used in Watchtower publications.