Jehovah’s Witnesses practice strict shunning of anyone disfellowshipped or disassociated. Shunning is applied to both friends and family, often for the remainder of life, leading to tremendous emotional suffering.

Jehovah’s Witnesses only commenced disfellowshipping in its current form in 1952 and the guidelines on how to treat disfellowshipped members has remained largely unchanged since 1981, when it was directed to avoid uttering a simple hello to a disfellowshipped person.

“Thus “disfellowshiping” is what Jehovah’s Witnesses appropriately call the expelling and subsequent shunning of such an unrepentant wrongdoer. … a simple “Hello” to someone can be the first step that develops into a conversation and maybe even a friendship. Would we want to take that first step with a disfellowshiped person?” Watchtower 1981 Sep 15 pp.22,25

This article quotes Watchtower guidelines that identify the extreme nature and effect of shunning. To understand why Watchtower’s rules on shunning lack scriptural merit, see Is Disfellowshipping Scriptural?

The rules on treating a disfellowshipped person are strict. A disfellowshipped person is not to be associated with under any social circumstances and a simple greeting advised against even in the kingdom hall. This treatment is harsher than how Jehovah’s Witnesses treat people of the world, with whom a polite level of interaction is allowed.

Few people would consider it acceptable that a religion demand parents shun their own children, yet shockingly Watchtower insists members even shun immediate family members. It is incomprehensible that the following quotes were written in this century.

“Despite our pain of heart, we must avoid normal contact with a disfellowshipped family member by telephone, text messages, letters, e-mails, or social media.” Watchtower 2017 Oct p.16

“And all members of the congregation need to be determined to avoid the company of disfellowshipped individuals.” Watchtower 2011 Nov 15 p.5

“Today, Jehovah does not immediately execute those who violate his laws. He lovingly gives them an opportunity to repent from their unrighteous works. How would Jehovah feel, though, if the parents of an unrepentant wrongdoer kept putting Him to the test by having unnecessary association with their disfellowshipped son or daughter?” Watchtower 2011 Jul 15 p.32

“Is strict avoidance really necessary? Yes for several reasons. … Although there might be a need for limited contact on some rare occasion to care for a necessary family matter, any such contact should be kept to a minimum.” Keep Yourself in God’s Love (2008) pp.207,208

With the advent of JW Broadcasting, videos discuss shunning with the accompaniment of moving music and storylines, using emotions to convince viewers into accepting this inhumane treatment as deserved and beneficial.

Shunning is positioned as a weapon to force a person to “return to Jehovah.” This is blatant acknowledgement of the manipulative intent of shunning, but ignores the obvious fact that many only return to have a relationship with their family, and Jehovah does not factor into the decision.

Consider just one example of the good that can come when a family loyally upholds Jehovah’s decree not to associate with disfellowshipped relatives. A young man had been disfellowshipped for over ten years, during which time his father, mother, and four brothers “quit mixing in company” with him. At times, he tried to involve himself in their activities, but to their credit, each member of the family was steadfast in not having any contact with him. After he was reinstated, he said that he always missed the association with his family, especially at night when he was alone. But, he admitted, had the family associated with him even a little, that small dose would have satisfied him. However, because he did not receive even the slightest communication from any of his family, the burning desire to be with them became one motivating factor in his restoring his relationship with Jehovah.” Watchtower 2012 Apr 15 p.12

The concept that a son should be bribed back to the religion is a thinly veiled attempt at increasing membership numbers and of dubious spiritual value.

“No more fiendish punishment could be devised, if such a thing were physically possible, than that one should be turned loose in society and remain absolutely unnoticed by all the members thereof.” (The Principles of Psychology Volume 1 pp.293-4 William James Dover Publications)

Few people can appreciate the depths of those words in the way a disfellowshipped person can, having experienced a close friend cross the road to avoid you, family delete you off social media, and the members of your congregation pretend you are not in front of them to avoid the awkwardness of not being able to say “Hi.”

Jehovah’s Witnesses find shunning all made the more difficult to cope because they are warned against developing friendships with “worldly people,” anyone not associated with the religion, and have few friends outside the religion. Upon being disfellowshipped, they suffer not only the heartbreak of losing loved ones, but extreme loneliness at having no friends. This is at a time when the emotional support of friends is most vital.

Taking away the freedom of members right to choose who should or should not be associated with is common amongst high-control, totalitarian groups. Steven Hassan, author of Combating Cult Mind Control, advises that the first question a person should ask before joining any group is;

“Does your group impose restrictions on communicating with former members? This is one of the most revealing sets of questions you can ask any cult member. Any legitimate organization would never discourage contact with former members.” Combating Cult Mind Control p.109

He notes the damage shunning causes.

“People who choose to exit a group where they know they will be likely cut off–shunned, disconnected by all of their family and friends– face incredible suffering, pain, and hardship. The level of pain is unimaginable for the average person. If they do not succumb to the pressures to return to the group, they become resilient and strong. … People kicked out of these groups are most at risk for serious emotional breakdown, addiction, suicide and other major issues of public health.” 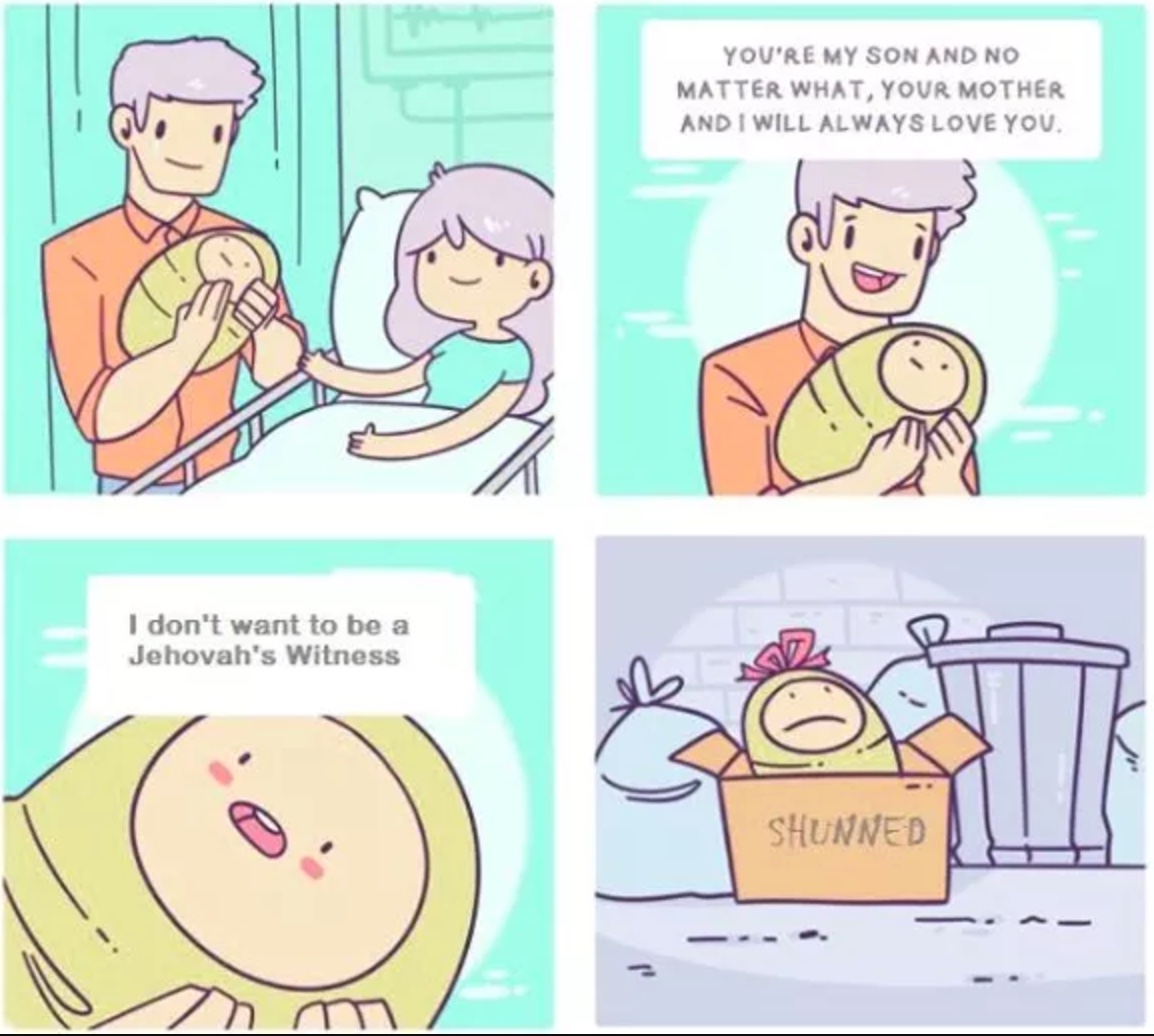 Family is recognised as of utmost importance and healthy family relationships are a key contributor to happiness and emotional stability. Family is the core of society and the United Nations Universal Declaration of Human Rights, Article 12 states;

“No one shall be subjected to arbitrary interference with his privacy, family, home or correspondence, nor to attacks upon his honour and reputation.”

Watchtower contravenes this right when forbidding members from having general association with disfellowshipped family members. Watchtower convinces members to believe a disfellowshipped person has left Jehovah and that parents have an obligation to put Jehovah above their children by shunning them. If your parent does respond to a text from you, the response likely will be that you must return to Jehovah if you want to be part of your family again. To be shunned by family is devastating, as is receiving occasional callous messages that you will never be considered part of the family unless you “return to Jehovah.” The strongest person of any age cannot be subjected to such rejection without emotional trauma, and experiences online show everyone suffers greatly at being shunned. Whilst the pain lessens over time, it never leaves. Former Jehovah’s Witnesses regularly report that after being disfellowshipped they struggle with depression or PTSD, and it is tragic that suicide is a common contemplation or sometimes acted upon.

If you are struggling to cope with being shunned, or the thought of this being a possibility in the future, do not be ashamed or afraid to reach out for help. If you have had any thoughts of suicide, immediately go to I Feel Suicidal for an extensive list of free help lines around the world. Most importantly, there are many former Jehovah’s Witnesses that can support and guide you at forums such as reddit.com/r/exjw/. They know intimately the pain you are feeling, something that few other people can relate to, and are eager to ensure you build up a life beyond shunning.